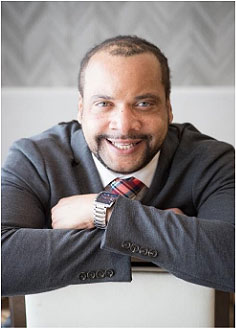 A. Robert Gregory, a native son and product of public schools in the city of Newark and Hillside, has over 22 years of experience in Education.

Acting Superintendent Gregory joined the Hillside Public Schools in January of 2020 with 22 years of experience in education in the city of Newark. He served a year as the CEO/Superintendent of Marion P. Thomas Charter School located in Newark and 22 years as an educator and leader in the Newark Public Schools.

He is the former Interim Superintendent of the Newark Public Schools, a role he assumed on February 1, 2018, after two decades of State operation and control.

Prior to serving as the Interim Superintendent of the Newark Public Schools, Mr. Gregory was appointed as Deputy Superintendent in June of 2017 where he oversaw the revision of the strategic planning process and managed the professional development of school principals and assistant superintendents while supporting the district's successful transition to local control. Under his leadership the district saw an increase in SAT scores, enrollment in AP and Dual Enrollment Courses, and NJSLA outcomes in ELA and Math.

Previously, Mr. Gregory served as the Assistant Superintendent of NPS High Schools for 2 years. The district experienced an increase in graduation rates of nearly 20 points during his tenure. He also served as a teacher, teacher coach, supervisor and principal.

He is the founding principal of American History High School, established in 2007. The school became the fifth magnet school in Newark and first of its kind in New Jersey. As Principal, Gregory maintained a 94% or above graduation rate of which at least 90% of his students gained admissions and attended college. Under Gregory's leadership, American History High School was ranked amongst the nation's best high schools receiving its first Silver Medal and National Ranking in the 2015 U.S. News World Report's Best High Schools in America.

Mr. Gregory graduated from West Chester University in Pennsylvania with a BA in Secondary Education, Social Studies and is a graduate of Seton Hall University with an MA in Educational Leadership and Management. Education runs in his family; his father was a teacher; vice principal and principal in Newark for 25 years.

Mr. Gregory is excited to return to Hillside and determined to ensure all students are afforded a quality public education that will enable them to thrive in a competitive 21 st century global economy.